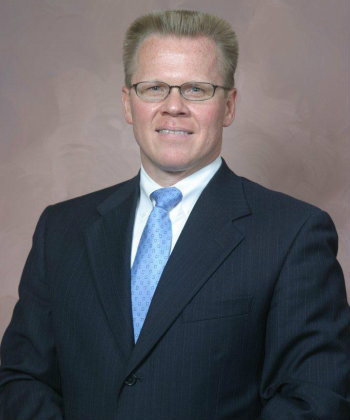 Dr. James Edward ‘Ed’ Wilkinson is son of Elizabeth ‘Betty’ Wilkinson and the late Means Wilkinson. He is a 1979 Greenwood High School graduate where his peers elected him ‘Most Athletic’ in ‘Who’s Who’ and was the Greenwood Bulldog football team captain his senior year. Ed and wife of 28 years, LaDonna, have one son, Daniel, a student at Antonin Scalia Law School, George Mason University, where he is on the Law Review Board.

Ed earned a BSBA, Finance & Banking, and MBA from the University of Arkansas, where he was a brother of Lambda Chi Alpha. He furthered his education at SMU’s Southwestern Graduate School of Banking and LSU’s Professional Master of Banking curriculum. Additionally, he completed an executive education program at John F. Kennedy School of Government, Harvard University. Ed subsequently earned a Doctor of Business Administration (DBA) from Walden University, College of Management and Technology. Using the conceptual framework learned at Harvard, his doctoral study was ‘Credit Strategies for Small and Medium-Sized Enterprises Within a Changing Environment.’ Ed earned his Master of Laws (LL.M.), i.e., Legum Magister, from the renowned University of Liverpool (UK) School of Law focusing on International Business Law. His dissertation was entitled, ‘Anti-Money Laundering Regime: A Foundation for Developing Countries’ Anti-Corruption Framework.’

At the onset of Operation Desert Shield/Desert Storm, Ed followed family tradition by entering the US Naval service. He was first attached to the USS Holland, a submarine tender in north Pacific home ported in Guam. He later served as a Company Commander, Logistics Officer, Operations Officer, and Executive Officer for Seabee and Cargo Handling Battalions. In Global War on Terrorism, Ed planned and executed 30 operations in direct support of Operations Iraqi and Enduring Freedom. He served as US Navy 5th Fleet Watch Commander in support of operations in Iraq and Afghanistan. Ed served in-theatre in the Middle East as Commanding Officer, Naval Support Activities detachment, Bahrain. He qualified in both Surface Warfare and Seabee Combat Warfare. Ed graduated from the US Navy Supply Corps School, completed the US Marine Corps Expeditionary Warfare Staff Planning curriculum, and graduated from the US Air Force Command and Staff College.

Once again following his late father’s footsteps, Ed was elected to serve in the Arkansas legislature. He served 16 years (1994-2010), including 6 years in House of Representatives and 10 years in Senate, the maximum allowed by Arkansas term limits. He distinguished himself as Chair of House Banking Committee where he worked closely with the Arkansas Bankers Association to replace Arkansas’ hodgepodge of banking laws with the Arkansas Banking Code of 1997. During his tenure as Chair of powerful Senate Judiciary Committee, Ed was affectionately known as ‘Mr. Chairman’ throughout the capital. He was a strong advocate for the rule of law, particularly the 14th Amendment – equal justice under law. The Arkansas Judicial Council awarded Ed the 'First Branch Award' for his outstanding service in providing improvement to the administration of justice in Arkansas.

Ed’s hobby is studying history and genealogy. He continued his late father’s passion of tracking and documenting his ancestor’s roots from the first colonial settlements to the hills of Arkansas Territory. His family settled Arkansas (River Valley) Territory before statehood. Ed is a 7th generation Arkansan. The membership of the National Huguenot Society elected him to serve as its National Historian General. Ed is Past President Arkansas Huguenot Society and is a member of other genealogical societies, including the Sons of American Revolution.

In his book ‘If These Rocks Could Talk’ about Greenwood School converted into Wilkinson family estate, Ed takes you back to the days when life’s simple pleasures were most treasured. In the ‘History of Good Shepherd Presbyterian Church: The First 100 Years 1853-1953,’ Ed provides a history of the Church and her members’ contributions to the early development of Greenwood, Arkansas.

Ed served as Chair/President of Greenwood Chamber of Commerce and was selected ‘2004 Citizen of the Year.’ He was founding President of the Greenwood Rotary Club and is a Paul Harris Fellow. He served on the Executive Council (Vice President - Fundraising) Westark Area Boy Scouts of America and served on Board of Directors of United Way of Fort Smith. Ed retired after over 21 years of service on Greenwood Fire Department. He is a Life Member of Harris/Hannah Veterans of Foreign War (VFW) Post in Greenwood.

The South Sebastian County Boys and Girls Club named Ed '2009 Supporter of the Year.' He was awarded 'Friend of the Senior Citizen Award' for his many hours of volunteer work and dedication while serving on the Franklin County Senior Citizens Board, the Sebastian Retired Citizens Association Board, and the Westark Area Agency on Aging Board. The active members of Lambda Chi Alpha Fraternity at the University of Arkansas elected Ed '2019 Alumni of the Year.' The City of Greenwood named the pavilion in Bell Park 'Senator Ed Wilkinson Community Pavilion' in his honor.

Ed is Past President Fort Smith Shrine Club, Past Master Greenwood Masonic Lodge, Past Master Sebastian Lodge in Fort Smith, Past Patron Greenwood Order of the Easter Star, and former Executive Councilman and Wise Master Western Arkansas Scottish Rite Bodies. He was coronated as a 33rd Degree Scottish Rite Mason. He is a Knights Templar and member of Red Cross of Constantine of the York Rite. Ed is an awardee of the ‘Legion of Honor’ Order of DeMolay.